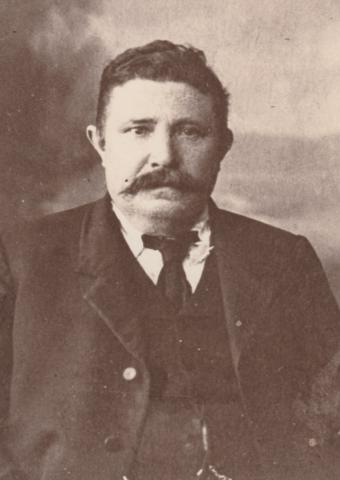 This photo was possibly taken in the 1890s and probably in Victoria.

William Jacob Jansen was from Groningen but records show he was born on 30th October 1948 at Zuidlaren, Drenthe, Netherlands, registered as Jacob Jansen. His father was Jan Jansen, a weaver and his mother Albertje Kroos. (Some of Jacob's ancestors have been traced back to about 1630 and most back to at least the early 1700s). Jacob was a chef according to his death certificate. He married Frances Eleanor Lyon in Melbourne on 3rd May 1876 and died on 6th July 1928 in Melbourne (Sandringham).
At some stage he changed his surname to Johnson and appears to have been known as Jacob though some records mention William Jacob. One of Jacob's sisters also migrated to Australia. She was Lukkina Jansen (1857-1944) who married James Edward Hall. Lukkina was known as Lucy and there's a photo of Lucy here.